Czech Struggle for Freedom and Democracy 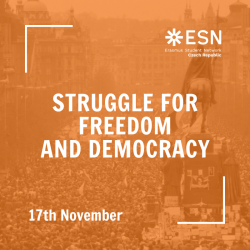 After gaining independence from the Austro-Hungarian Empire following WWI, Czechoslovakia was officially formed on 28th October 1918. But following 20 years of independence, the country was occupied by Nazi forces in 1938 until being liberated in 1945, a time the Czech lands officially spent as the Protectorate of Bohemia and Moravia.

On 17th November 1939, Nazi forces stormed Czech Universities including Charles University in Prague after organized demonstrations following the killings of student Jan Opletal and worker Václav Sedláček. Nine Czech students and professors were executed on the 17th, and 1,200 were sent to concentration camps. As soon as the following year, Czechoslovak Army forces in England commemorated the November 17 tragedy with a remembrance. And in the years following the war, the date became a national holiday in Czechoslovakia and other countries known as International Students’ Day.

In 1948, Communists seized control of the country and our state became the Czechoslovak Socialist Republic for the next 40 years. But student demonstrations in Prague and elsewhere on 17th November 1989 sparked the Velvet Revolution and the end of the Soviet era in Czechoslovakia.

Since 2000, 17th November is a national holiday in both the Czech Republic and Slovakia known as Struggle for Freedom and Democracy Day or the International Student's Day. This day commemorates two student demonstrations that bookend 50 years that Czechoslovakia spent (mostly) under the thumb of foreign powers.