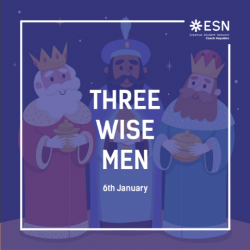 Many people around the world know the story of Kaspar, Melichar and Baltazar. According to legend, they were kings from the East, but in the Bible, they are called Sages because they were very educated.

The Feast of the Three Wise Men (svátek Tří králů in Czech) culminates in a twelve-day Christmas season. Originally, on January 6, the Feast of the Epiphany was celebrated according to the Gospel; the Feast of the Three Kings did not join it until the Middle Ages. It used to be full of traditions, customs and divination of the future, so at least some let's remember. At home, it is customary to decorate the tree and clean the Christmas decorations. Two thousand years ago, these Three Wise Men knew, perhaps from the stars, that a new and very powerful king was soon to be born west of their kingdom. They wanted to worship him and bring him gifts. Therefore, they loaded the greatest valuables of their time - gold, incense and myrrh - on camels and elephants and set out on a long journey. The hot sun was blazing during the day, so the caravan wandered at night, and the Sages were looking for a way according to the position of the stars in the night sky.

The new star, announcing the birth of the great king, suddenly shone very brightly over the great city of Jerusalem, as if leading them. The Three Wise Men rejoiced, entered the city and saw its magnificent houses and palaces. They thought that it was in them that they could find the born king. However, the star did not stand still but led them on. So they forsook Jerusalem and the wicked King Herod. He was very worried about their arrival, and as soon as he heard that they were looking for a new king, he immediately began to think about how to get rid of him. The Sages, meanwhile, wandered on to the star. She led them to the city of Bethlehem.

But they left Bethlehem behind. The star that had led them so far had stopped in the fields outside the city. She shone over the place where Joseph and Mary had taken refuge and where they now looked after the newborn Jesus. Kaspar, Melichar and Baltazar were at the finish line. They went in, into an ordinary stable, fell to the ground, and worshipped the little child in the manger, believing that he would be a great king. They presented him with their precious gifts and rejoiced greatly.

Full of this joy, they then returned to their homes, to Nubia, to Tarsus and to Sheba. They were going to talk about a new king who had just been born and whom they had come to worship. However, they did not report to King Herod. In the dream, an angel appeared to them and instructed them to return to their country in another way.

In Central Europe, the feast of the Three Kings is probably the most experienced blessing of houses and barns, in which the letters C ♱ M♱ B, usually K ♱ M ♱ B, are written on the door with holy chalk. Balthazar, as popularly translated, but the abbreviation of the Latin Christus mansion benedicat - God bless this house. The three crosses behind the letters are not plus signs, but symbolize the Holy Trinity for them - the Father, the Son and the Holy Spirit. Three kings' crosses as formulas of blessing had the power to protect the economy from evil spells, misfortunes, and calamities.